Scapegoats……we’ve most likely been one in our lifetime or made someone else one for our own selfish purposes.  The instant access to social media, if the outlets can be trusted, would make one think it is the new American past-time.  But in reality we need only look in the book of Genesis to find Adam, Eve, and the Deceiver all blaming one another as they find themselves exposed before the Creator of the Universe. The proverbial pointing of the finger is as old as time itself.

In the Bible, in the book of John, chapter 8, verses 1-11, we find a life-changing “scapegoat” story.  The religious leaders of the day were hell-bent on destroying Jesus.  He was a threat to their power structures, their livelihoods, their reputations.  Everywhere He went they schemed to entrap and discredit Him.  They didn’t care who they used or who they hurt in the process.  They were master manipulators.

At dawn we find Jesus in the Temple teaching. The people came…lots of people….to hear Him.  The serene setting is interrupted as the religious scholars and leaders elbow their way through with a woman who was caught in the act of adultery.  Their mission and intent was not to honor their laws and teachings as they stated, but to trick Jesus….to create doubt in the minds of His followers….to send Him packing in shame and dishonor.  Their scapegoat….a woman…had most likely been apprehended the night before and held by Temple guards.  They would set the stage when Jesus arrived in the Temple the next day.

After a careful trial and the opportunity given for confession, the consequence for adultery was death by stoning. Can you imagine this woman’s fear through the cold, lonely night?  She had no idea she was being used as a scapegoat.  She only knew she had been discovered in an act that required death as punishment….a horrible painful death.  Now she is brought into the Temple and placed in the middle of the huge crowd that only moments before had been listening to Jesus teach.  Reality TV in it’s earliest form.

I’m sure you could have heard a pin drop as the religious leaders rudely broke through the crowd confronting Jesus with their case, self -assured they would prove Him to be a liar and a fraud.  In their jealousy and hatred they believed they could trap Him with whatever He said should be done with the accused woman.  Jesus bends over and begins writing in the dirt.  He doesn’t get up.  He doesn’t acknowledge them. 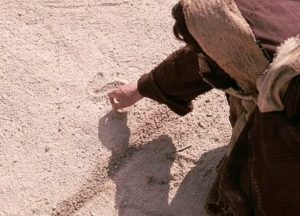 Can you feel the tension in the air?  Can you envision the crowd looking at the Pharisees and then back to Jesus?  Holding their breath…waiting ….  And what of the woman standing in humiliation, her sin exposed for all to see?  Her reputation now ruined. What about her spouse?  Her family?

And what was Jesus writing in the dirt?  The most common theory, given cultural history and Old Testament references, is that he was writing condemnation against her accusers. It was suggested He even went so far as to write their names.  In modern language…He was “kicking butt and taking names.”

The Scripture tells us the Pharisees persisted in anger.  Can you hear the raised voices?  The arrogant tones and posturing? When Jesus finally speaks it is powerful and convicting….”Whichever one of you is without sin should throw the first stone.”  Then He bends down and continues writing in the dirt.  What calmness.  He knew Who He was…He knew He was the One with the final say and authority that day.

The accusers….the scapegoat-makers….turned around and left…one by one…from the oldest to the youngest. Their actions spoke louder than words.  They were guilty of sin themselves.  They were religious posers….manipulators….users….who cared nothing for the souls of those they used to prop up and preserve their system of power.  The condemners had become the condemned.  The tables had turned.

Now the eyes of the crowd go back to the woman standing before Jesus who is still bent over.  He stands, looks at her and asks…”Where’d they go?”  “Is there no one to condemn you?”  There they are….the Giver- of -Mercy and the Scapegoat.  They both knew she was guilty.  Had she heard the stories of this Mercy- Giver?  Did she think she would still be put to death?  What did she see in the eyes of the One who loved her soul more than His own life?

His words….full of power….life….forgiveness…..set her free to live a new life. “I don’t condemn you either…Go and be free from the sin that plagues you.”  She need no longer hide in the darkness of night as the cursed adulteress….the soiled one….shunned and shamed.  She was free….washed clean….a new woman with a new identity.  The Mercy-Giver had declared her so. 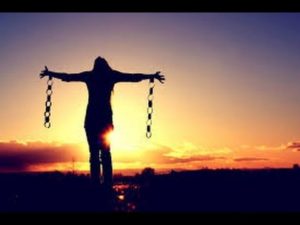 Questions from a Scapegoat…