If you follow me anywhere on social media, you know I love sunrises and sunsets.  I #hashtag all my sunset photos with #chasing the sunset.  For me a sunset is God’s signature to the end of a day.  There is something calming and soothing to the last rays of sunlight creating splashes of color through the clouds.

The photo above is the sunset from March 30, 2015…the day my dad passed away.  He took his last breath at 6:30 p.m..  As the nurses were doing their final preparations before the young men came to take his body to the mortuary, Gary and I walked outside and captured the glow of the day’s end.  The quiet, gentle setting of the sun was a balm to my grieving weary heart.

On a cold, snowy Spring morning we laid my dad’s body to rest in a little country cemetery in the rural community where his family had homesteaded and he had been raised. 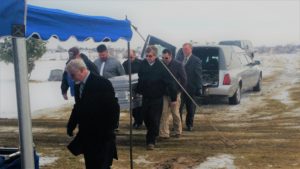 I hand picked these six Men of Honor to carry my dad to his final resting place. They represented my dad’s life and mine, their lives intertwined with ours.  They had honored my dad and his life in various ways throughout their own lives. As I mark the third anniversary of my dad’s home-going, I wanted to honor them …..

Craig Wolever is the son of my dad’s cousin, Paul. Paul fought a valiant battle before succumbing to ALS. Craig farms the land that his grandfather and his father farmed.  He’s the 4th generation carrying on the traditions of family and farming. Our great-grandparents migrated from Minnesota in a covered wagon in the early 1900’s to homestead and build a future for their children.

I asked my son-in-law, Shane Callicutt , to also take care of the graveside service.   This is a snippet of the grace filled words he spoke over my dad’s life…..

“See, if I knew one thing about him despite his struggles, he was determined to keep living.  He kept collecting stuff, he stayed involved in the lives of his grandchildren and great grandchildren.  He kept friendships.  Many people who wrestle with the demons he wrestled with shrink back and withdraw.  Not Jerry.  I think Jerry did what he could to enjoy the life he had left, and enjoy it as full as he was able.  Even though Radene and I have been away for most of the last five years, from what we heard, he pushed and fought to enjoy life and family until his body finally betrayed him for the last time.

Jerry doesn’t have to worry about that betrayal anymore.  He has outsmarted his body and gone to a place where he can think clearly, walk easy, and enjoy the presence of the Lord forever.  How do I know this?  Despite his difficulty communicating, I think he’s been trying to tell us for a long time in his own way that he had made his peace with God.  Whether he was giving you a country album with gospel songs, or how he always removed his cowboy hat when the family prayed, I believe he was saying that he was with us, that he shared our belief and love for Jesus Christ. “ 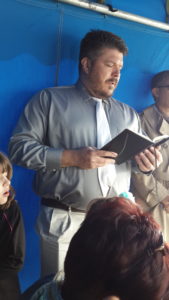 Dave Wolever, is the son of my dad’s oldest brother, Wesley.  Dave had lost his dad several years before.  Dave and I are a year a part in age. My childhood was spent wandering our grandparent’s farm with him and his three brothers. Being an only child, cousins were like “siblings” for me. We have held on to our relationship even though our branch of the family tree has suffered division and turmoil.

Scott Leis, is the eldest son of my dad’s cousin, Dorothy Jean.  He shared his memories of my dad later that day at the memorial service. He is a Marine…(once a Marine, always a Marine) having bravely served in Vietnam.  He and Dorothy Jean came to see my dad when he was recovering from a previous stroke in September of 2014. 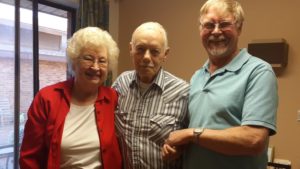 Scott told me this story about my dad and his brother, Clyde, in a Messenger post….”Hi Jeralyn, I really enjoyed seeing you and your Dad. He and Clyde were always special to me. I remember sitting between them at Uncle Roy and Grace’s for many family meals. They would each squeeze my leg on their side trying to make me protest. I never did.”

My son, Casey, has a physical resemblance to my dad and loves to hunt and fish like my dad did. 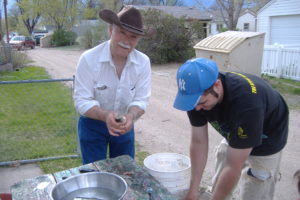 Casey did the eulogy for the memorial service.  Casey has a way with words…written and spoken.  His final thoughts were from a letter he wrote as if my dad were writing to me.  I believe it was inspired by the Holy Spirit and a copy still hangs on my refrigerator where I see it every day.

It began with “Daughter of my earthly life”….  several lines later came the words that are emblazoned on my heart forever….

“Here with Jesus, I feel right at home.

His face is familiar and His love I recognize, because ever since the day He came and rescued you, you rescued me day, after day, after day with His unending love.”

Brian Holzworth is my cousin on my mom’s side of the family.  Even though my parents had been divorced for many years and my mom had remarried, her two sisters and my cousins were still involved in our lives.  Brian is also a Marine and served our country with honor.  Brian and his three sisters were my “siblings” as well.  He and his youngest son, Nate, came to see my dad about a month and a half before his death. I was so touched when he asked to speak at my dad’s memorial. He had previously emailed me these words…..

“I always remember the subtle spark your Dad had in his eyes.  He made a very profound impact on my life as a boy for several reasons.  I was fortunate to have a very strong team of male role models in my life and your father was an important part of that team.”

There was one lone gentleman who took my camera and made sure he took pictures from every angle and of every family member.  He isn’t blood kin….but he is family.  Jimmy Brakefield from Salem, MO, drove most of the night with a friend to be with us.  When Gary welcomed everyone to the memorial service he was overcome with emotion because of Jimmy’s sacrifice to be there.  Jimmy is close friends with our children in Missouri. He and his beautiful wife always open their home to us when we visit.  What a testament of friendship and love.  Jimmy you became the scripture in Proverbs 18:24….“Friends come and friends go, but a true friend sticks by you like family. 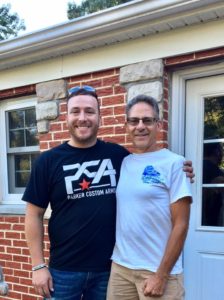 And last, but certainly not least….one more Man of Honor.  My husband, Gary, stayed in my dad’s room with me the last 24 hours of my dad’s life.  He was right beside me as my dad started to fade, telling him goodbye and that he loved him.  We knew we were on sacred ground as he took that last breath and walked into the presence of Jesus. 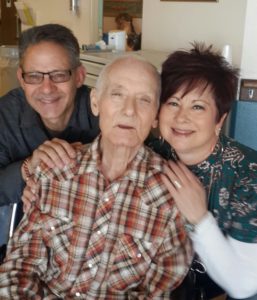 On that cold, snowy Spring day we huddled together to stay warm….we laughed……we cried….we sang “Amazing Grace”.  We came to honor one man and say our last goodbyes.  His life had touched all of ours in ways we will never forget. 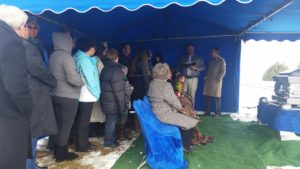 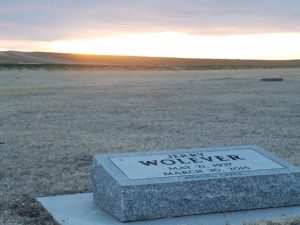